Interest-rate risk management, specifically the results of the Net Economic Value (NEV) Supervisory Test, has come into the spotlight for many credit unions over the last few months. There are two primary drivers that make this such a hot topic for credit unions right now. First, many credit unions experienced exceptional levels of balance sheet growth in 2020 and 2021 as deposits flooded into institutions at a record pace, driven by stimulus, reduced spending, and near 0% interest rates. This extraordinary growth had the effect of causing “reluctant leverage” and pushing capital ratios lower. The chart below shows the median quarterly asset growth (i.e., not annualized) and capital ratios for FHLBank Boston credit union members. 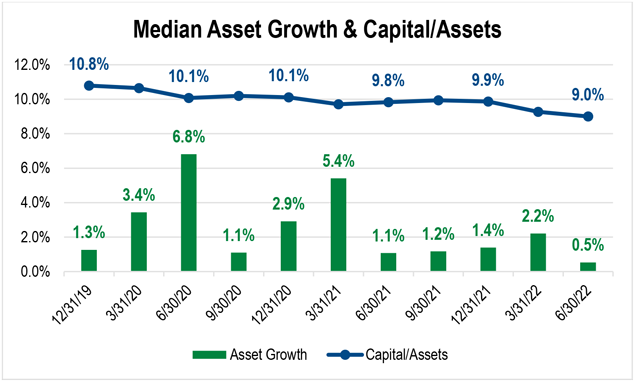 As excess deposits lingered and loan demand stalled, many credit unions deployed liquidity into investments. When rates began to rise in the latter half of 2021 before making a big jump higher in 2022, the unrealized gain/loss position for many swung from slight gains to losses of nearly 10%, as the chart below highlights. 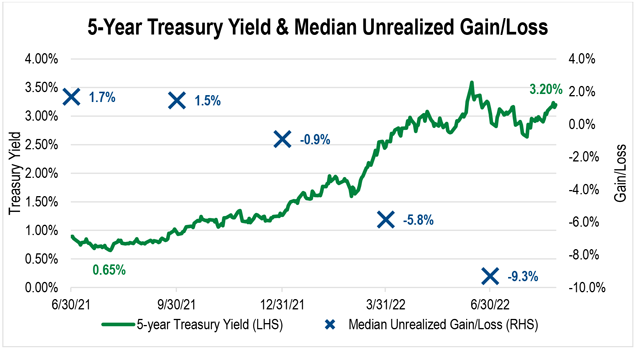 The combination of these factors has led to:

Unsurprisingly, we have heard from many members who were in the Low or Moderate Risk bucket for several quarters but now are in the High or Extreme categories on the NEV Test. Updated guidance  from the National Credit Union Administration on September 1, 2022, has removed the Extreme category and given examiners greater flexibility to access interest-rate risk, but the market and balance sheet-driven challenges remain.

Mitigating interest-rate risk on the balance sheet can involve reducing the duration of assets or extending the duration of liabilities. Reducing asset duration, either by remixing or deleveraging, can often require time and/or adverse impact to the income statement. Below we discuss three strategies on the liability side that can lend support to NEV Test results.

The NEV Test involves assigning standardized values to non-maturity deposits in the base case (1% deposit premium) and post 300 basis point rate shock case (4% deposit premium). That 3% change in value implies a very short duration being applied to these deposits.

At the same time, a five-year Classic Advance carries a duration closer to the stated final maturity and would show a much larger change in post-shock value than the deposit. The example below shows a scenario where the differential is nearly 9 points, keeping in mind that as a liability, a lower number is a better result for the credit union. Utilizing advances to extend liability duration can be an effective tactic, and with the shape of the yield curve (inverted beyond three years), the near-term interest expense in doing so is lower than if one were to fund short. 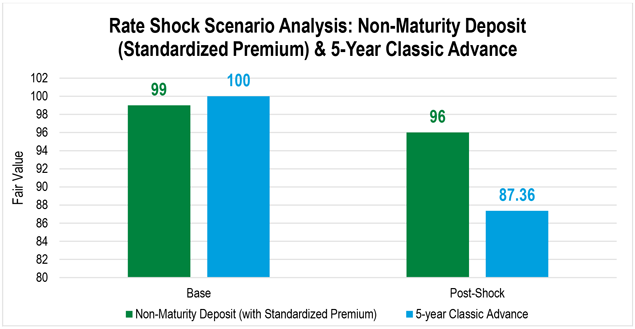 Long-term Classic Advances may produce more favorable results in a rate shock scenario vs. deposits subject to the standardized values used in the NEV Test.

As noted in this article, a flattened yield curve and higher levels of interest-rate volatility have made solutions like the HLB-Option Advance relatively more attractive of late. When granting FHLBank Boston the option to put back the advance at pre-determined intervals, the member can pay rates below that of the Classic Advance curve. Credit unions can get the added duration that helps the NEV Test by considering structures with longer lockout periods, such as the two-year and three-year lockouts with seven-year maturities noted below.  For example, the highlighted structures have coupons 60-80 basis points below that of Classic Advances with maturities that match the lockout period of the HLB-Option Advance. 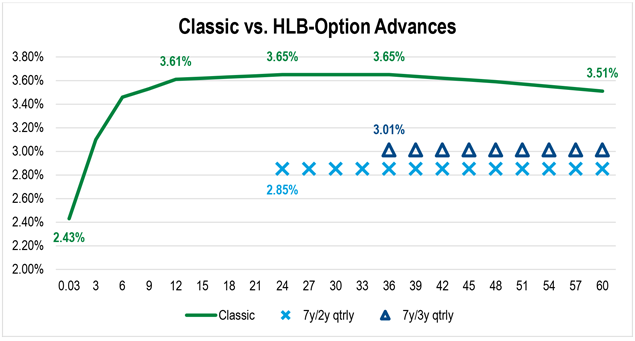 HLB-Option Advances with longer lockout periods may be a cost-effective way for credit unions to add liability duration. Rates shown above are as of August 26, 2022.

For example, a three-year maturity, one-year lockout period with a one-time call Member-Option Advance recently priced at 4.23%, while two-year and three-year Classic Advances were both at 3.68%. A credit union could initiate the Member-Option Advance, gaining the NEV Test benefits of the duration implied by the three-year maturity. After one year, the credit union can elect to prepay the advance (with no fee), or have it become a two-year bullet.

If rates are lower at the one-year mark, then the credit union will likely want to call the funding because NEV Test results were likely to have improved as asset values recover due to lower intermediate rates. Additionally, with lower market rates, the credit union would be able to replace the funding at a more favorable rate than the original 4.23%.

If rates are higher at the one-year mark, it’s possible that the credit union would still want to exercise the call. If two-year rates moved up by less than 55 basis points (the difference between the 4.23% three-year/one-year Member-Option and the two-year rate of 3.68%) then it would be economical to replace the funding. The Member-Option Advance can be a useful way to provide interest-rate protection but retain flexibility to recalibrate funding needs.

Recent market conditions have created challenges and opportunities for FHLBank Boston members. Our Financial Strategies group has developed a suite of analytical tools designed to help you identify the funding solutions that best fit the unique needs of your balance sheet. Please contact me at 617-292-9644 or andrew.paolillo@fhlbboston.com or reach out to your relationship manager for more details.

FHLBank Boston does not act as a financial advisor, and members should independently evaluate the suitability and risks of all advances.

arrow_forward
FOR OUR MEMBERS:

Strategies + Insights delivered to your inbox